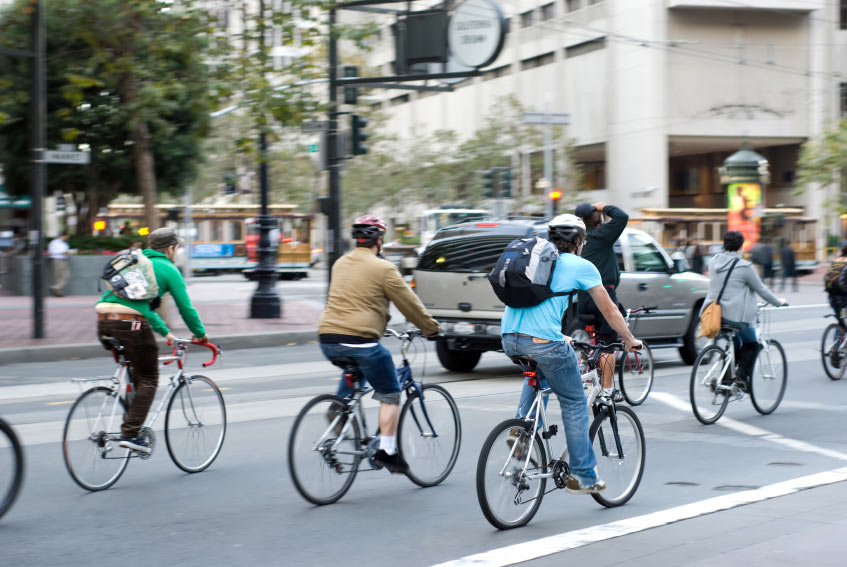 Cycling has become much more popular in recent years.  Bike lanes are being added to the streets of a lot of cities as lots of people hop on the bike to head into work, rather than take their car or public transportation.  But many of us never learned how to drive with cyclists next to us in a manner that allows both you and the cyclist to remain safe.  Here are some tips for driving around cyclists.

You should always be conscientious of opening your door when you’re exiting onto the street, especially if it is in a bike lane.  Cyclists often get surprised by doors on the street or in bike lanes and cannot avoid hitting them.  So, in order to preserve their bike and person and your car door, always take a look in your mirror and behind you before exiting.  Honestly though, you should really be doing this anyway as to avoid being taken out by a car.

Make sure to think about how you are going to pass a cyclist.  Nobody expects you to drive the whole time behind a cyclists doing 15, but you do have to wait until it’s a good idea to pass.  Ask yourself if there’s enough space, if there’s a stop coming up that will make it so you have to pass the cyclist multiple times, and whether the cyclist is aware of where you are in relation to them.

Just like with pedestrains in a cross walk, try to make eye contact with them so you know that they see you and you see them.  Never assume anything about the cyclist’s knowledge of you and your surroundings.

That said, you’ve probably made assumptions about how cyclists will behave on the road, and cyclists do the same to you.  So do you best to drive predictably to increase the odds that the cyclist will make the right assumption about your driving.

Try to be in the know about your locations laws about driving around cyclists.  If you do get into an accident with a cyclist and found to be at fault, that could lead to a lot more problems in your life.

If you aren’t a cyclist, talk to a cyclist buddy about what it is like to be on the road with cars.  It may give you a new perspective about what it means to share the road.

These are just some of the our driving school’s tips for driving around cyclists.  Always remember to stay safe and viligant on the road.